24 Dec 2020 • blog
This post is based on a NeurIPS 2020 paper that I worked on with Scott Jordan, Georgios Theocharous, Martha White, and Philip Thomas. Here are the links for the paper, video, and the code.

Reinforcement learning (RL) methods have shown promise to be applicable to real-world sequential decision-making problems such as medical treatment, budget constrained bidding, and other high-risk high-reward applications. However, to actually deploying RL algorithms for such real-world applications, safety guarantees are critical to mitigate serious risks in terms of both human-life and monetary assets. More concretely, here, by safety we mean that any update to a system should not reduce the performance of an existing system (e.g., a doctor’s initially prescribed treatment). A further complication is that these applications are non-stationary, which violates the foundational assumption of stationarity in most RL algorithms. This raises the main question we aim to address

How can we build sequential decision-making systems that provide safety guarantees for problems with non-stationarities?

In this work, we merge ideas from time-series literature and model-free RL to

In a non-stationary setting, the MDP that an agent might face after deployment might be different than the ones it has encountered before. Therefore, in a non-stationary setting we need to ensure safety with respect to the future MDPs that an agent might face. To formalize this, let \(\mathcal D\) be any available historical data and \(\texttt{alg}(\mathcal D)\) be a policy returned by an algorithm after analyzing the data. Let \(\pi^\text{safe}\) be a known safe policy and \((1-\alpha) \in [0,1]\) be the safety level desired by the user. Let \(\rho(\pi, i)\) be the performance of a policy \(\pi\) in episode \(i\) and let \(k\) be the last observed episode number such that episode numbers greater than \(k\) belong to the future. Then we aim to ensure, with high-confidence, that the future performance of the updated policy will provide improvement over the existing \(\pi^\text{safe}\). That is,

While it is desirable to ensure the safety guarantee of the form mentioned above, obtaining a new policy from \(\texttt{alg}(\mathcal D)\) that meets this requirement might not be possible unless some more regularity assumptions are imposed on the problem. For example, if the environment can change arbitrarily, then there is not much hope of estimating the future performance to ensure safety.

One way to make the problem more tractable could be to assume Lipschitz smoothness on the dynamics and rewards. However, we show a negative result in the paper and discuss why Lipschitz smoothness might be insufficient for our purpose. Therefore, to make the problem more tractable, we make an alternate assumption that the performance of any policy changes smoothly over time. That is, let \(M_i\) be the MDP in episode \(i\) and let \(\phi\) be a non-linear basis function (like Fourier basis, which is popular for modeling time-series trends) then

To address this problem, we build upon our previous work on non-stationary MDPs, which combines counterfactual reasoning with curve-fitting to estimate the future performance of a policy. That is, for any policy we first estimate its performances on all the past episodes using off-policy evaluation. This univariate sequence of performance estimates are then analyzed to make a performance forecast based on the trend resulting due to the underlying non-stationarity (see here for a short blogpost on that work).

The above discussion of the main idea relies upon a method to quantify uncertainty in a policy’s future performance. Quantifying this uncertainty requires a careful consideration of the following three factors.

The above image provides a computational graph for quantifying the uncertainty in the forecasted performance. Wild bootstrap leverages Rademacher variables \(\sigma^*\) and the errors from regression to repeat steps 2 and 3 above to create pseudo-performances. Based on these pseudo-performances, an empirical distribution and thus also the lower bound \(\hat \rho^\text{lb}\) for the future performance is obtained. We also show in our paper how the derivative of this lower bound \(\hat \rho^\text{lb}\) with respect to the policy parameters can be computed to search for a candidate policy \(\pi_c\) that maximizes the lower bound. Such a candidate policy will then have the highest chances of passing the safety test and providing a safe policy update.

We provide an empirical analysis on two simulated domains inspired by safety-critical real-world problems that exhibit non-stationarity. One is for the treatment of Type-1 diabetes and the other is for a recommender system. To understand the impact of different rates of non-stationarity, we conduct the experiment for varying degrees of speed, where speed of 0 represents stationary environment and higher speeds indicate quicker changes in the environment. 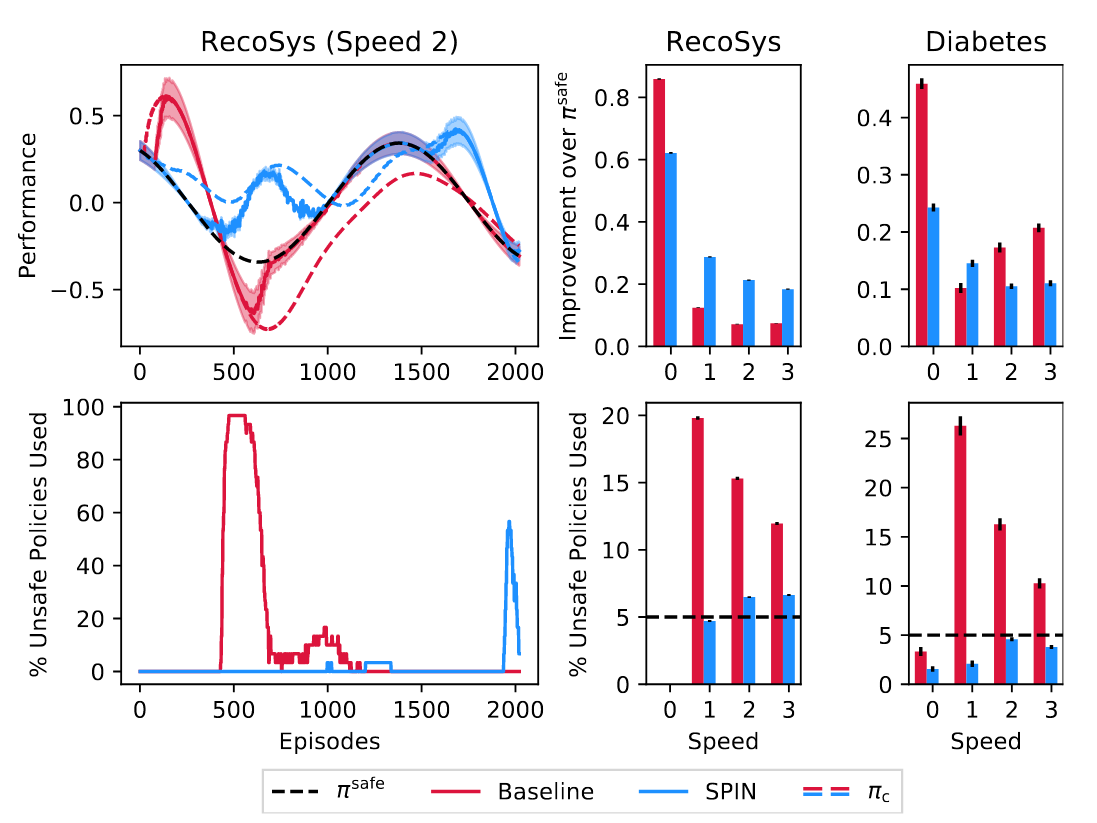 The above figure illustrates the safety violation rates and performances for the proposed method, SPIN, and a baseline safe policy improvement method that does not account for non-stationarity. Top-left plot illustrates a typical learning curve, where it can be noticed that SPIN updates a policy whenever there is room for a significant improvement over the (unknown) performance of \(\pi^\text{safe}\). In the middle and the right plots it can be seen that both SPIN and the baseline method ensure safety in the stationary setting but the baseline method can result in unsafe policies more than the desired 5% threshold in the non-stationary setting. In comparison, SPIN provides policy improvement and maintains the failure rate near the desired 5% threshold always.

Further, our experimental results call into question the popular misconception that the stationarity assumption is not severe when changes are slow. In fact, it can be quite the opposite: Slow changes can be more deceptive and can make existing algorithms, which do not account for non-stationarity, more susceptible to deploying unsafe policies. For more details, we encourage the readers to check out the paper.