23 Dec 2020 • blog
This post is based on an ICML 2020 paper that I worked on with Georgios Theocharous , Shiv Shankar, Martha White, Sridhar Mahadevan, and Philip Thomas. Here are the links for the paper, video, and the code.

Reinforcement learning algorithms typically assume that the reward function and the transition dynamics are fixed, that is the underlying MDP is stationary. This assumption is so deeply rooted within the current methods that it is not even explicitly mentioned. However, this assumption is often violated in many practical problems of interest. For example, consider an automated medical care system. Over time, human physiology changes leading to a change in the impact of a medication on a patient. Similarly, consider a robotics system. Over time, motors gradually suffer from wear and tear, leading to increased friction. Further, in almost all human-computer interaction applications, e.g., dialogue systems, recommedner systems, online marketing, etc., human behavior gradually changes over time. In such scenarios, if the automated system is not adapted to take such changes into account then the system might quickly become sub-optimal. This raises our main question:

How do we build systems that proactively search for a policy that will be good for the future MDP?

In this work, we merge ideas from model-free reinforcement learning and time-series literature to develop a method that

In the non-stationary setting, it would have been ideal if we had some samples from the future MDP so that we could search for a policy \(\pi\) beforehand, which would be good for the MDP the agent faces when deployed. However, getting even a single data sample from the future MDP is impossible. All that we can expect is some data collected using a behavior policy \(\beta\) for the MDPs the agent had interacted with in the past episodes. Therefore, to estimate the future performance of a policy \(\pi\) we use an indirect procedure by first asking a counter-factual question:

What would have been \(\pi\)’s performances, if we had executed \(\pi\) in the past episodes?

Having obtained the counter-factual estimate of \(\pi\)’s performances in the past episodes, we now ask the other question,

Note that this approach naturally generalizes for the stationary setting as well, where the time series trend essentially corresponds to a horizontal line.

The above image illustrates the main idea. The dotted lines represent that we cannot use conventional methods to compute or estimate gradients of \(\hat J_{k+1}(\theta)\) as we have no samples from the future MDP. Instead, we estimate \(J_{k+1}(\theta)\) as a composition of two programs: one which connects the policy’s parameters to its past performances, and the other which forecasts future performance as a function of these past performances. An optimization procedure can be obtained by taking derivatives through this composition of programs to update policy parameters in a direction that maximizes future performance.

This decomposition has an elegant and intuitive interpretation. The terms assigned to \((a)\) correspond to how the future prediction would change as a function of past outcomes, and the terms in \((b)\) indicate how the past outcomes would change due to changes in the parameters of the policy \(\pi_\theta\). Here, term (b) can be obtained using standard off-policy gradient estimators and term (a) can be obtained as the following,

In the equation for the total derivative above, notice that as the scalar term (a) is multiplied by the off-policy gradient term (b), the gradient \(d \hat J_{k+1}(\theta)/d \theta\) can be viewed as a weighted sum of off-policy policy gradients. To understand these weights better, in the left of the following figure we provide a visualization for the weights obtained from term (a) for different episodes \(i \in [1, 100]\). 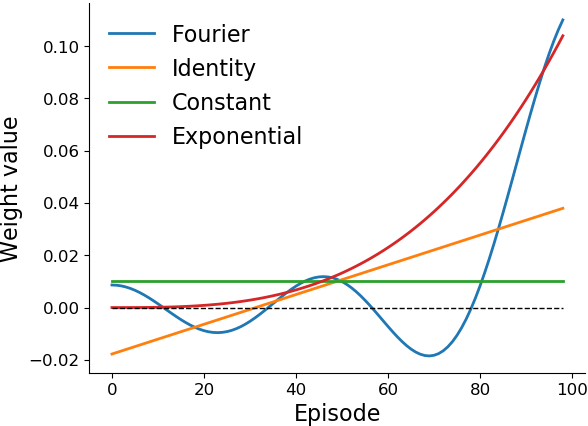 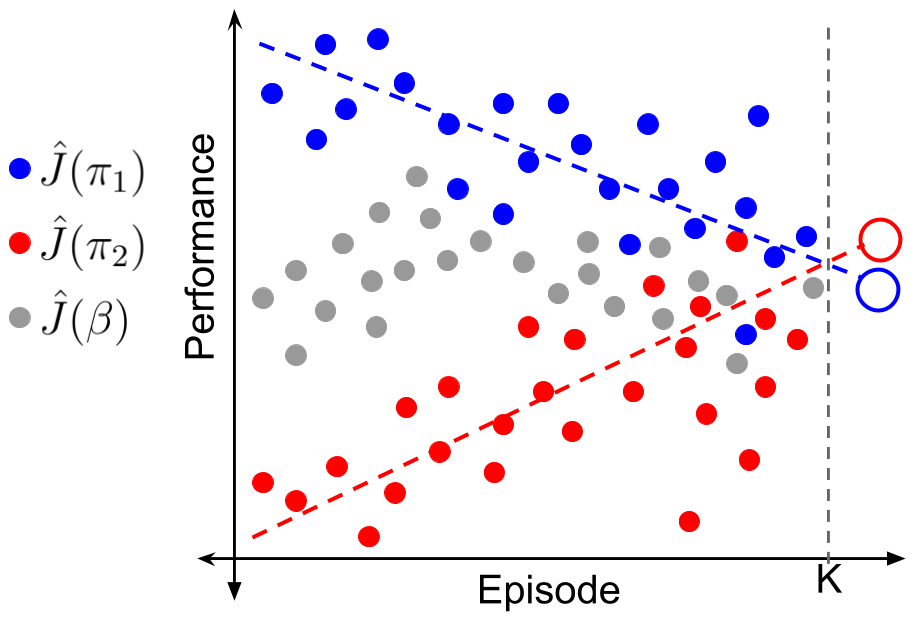 Perhaps intriguingly, when an identity basis or Fourier basis is used for \(\phi\), we notice an occurrence of negative weights, suggesting that the optimization procedure should move towards a policy that had lower performance in some of the past episodes!

While this negative weighting seems unusual at first glance, it has an simple interpretation in hindsight. Consider the image on the right above. Despite having lower estimates of return everywhere, \(\pi_2\)’s rising trend suggests that it might have higher performance in the future, that is, \(J_{k+1}(\pi_2) > J_{k+1}(\pi_1)\). However, existing online learning methods like follow-the-leader maximize performance on all the past data uniformly (i.e., the green curve in the left image which gives equal weight to each episode). Similarly, the exponential weights (red curve in the left image) are representative of approaches that only optimize using data from recent episodes and discard previous data. It can be checked that either of these methods that use only non-negative weights cannot capture the trend to forecast \(J_{k+1}(\pi_2) > J_{k+1}(\pi_1)\).

In comparison, the weights obtained when using the identity basis (orange curve in the left image) would facilitate minimization of performances in the distant past and maximization of performance in the recent past. Intuitively, this means that it moves towards a policy whose performance is on a linear rise, as it expects that policy to have better performance in the future. Fourier basis further extends this idea while removing the restriction on the trend to be linear. Observe the alternating sign of weights in the figure above when using the Fourier basis. This suggests that the optimization procedure will take into account the sequential differences in performances over the past, thereby favoring the policy that has shown the most performance increments in the past. Further, these weights are obtained automatically as a by-product of regression!